ONE OF THE BEST BACKCOUNTRY SKIING DAYS

Fresh meat at Bârcaciu, and they lovin it

This year, Bârcaciu ski touring event hold place, a bit underground, among friends but it had happen. And it was a great weekend to spend on the mountain with beautiful snow, fresh lines and bluebird days. It was also the birthday of the man in charge, the one and only Sherpa from Carpati, Mihai Petre, and seems the gods favor him that we had this briliant conditions.

I feel that i’m repeating myself but this area has so much to offer in terms of mountain acces, lines, trails, tracks and anything in between (good food and good accommodation😊)

Don’t be shy, check it whenever you have the opportunity. I will not continue buzzing you with the same details, just check the pictures and movies bellow and if you want, the the past articles like Bârcaciu Skitouring VRR Edition or Făgăraș from peak to creek #barcaciu. Enjoy and ride safe!

Sketchiest day so far at Balea Lake. I know that from the cover it doesn’t look that way, but it was. Things can change very fast on the mountain, so expect anything. We had a beautiful start of the day, with a decent descent from the ridge of the mountain to Capra lake, but then, the fog came and it stayed for diner… and breakfast next day too :))).

After that, we tried to become friends but she wont open up to us…😆 hard to make a bond when there’s no communication, you feel like talking to the walls :))). Enough with the funny talk, here are some pictures and 2 movies to judge by yourselves. Also for more riding in Balea Lake, you can check BALEA LAKE POWDER DAYS. Enjoy and ride safe!

One easy to acces and ski point in Bucegi mountains. Leave a comment for more details. Enjoy and ride safe!

This is a classic tour for us, each year we do one or tow rides in Ciucas. Why? because its accesibile, usually holds good snow despite of the windy ridge, has good slope with moderate inclination and you can have 2 or 3 decent descent in one day. I recomand a tour in Ciucas for intermediar to advance skiers and the recommendation is to check the weather and in before you go there. You can also look for a guide to take you there, its 1 day job and for sure you will find some good ones here like our friends from Massif Experience. if its heavy snow after a long dry period, better stay bellow the tree line or on mellow slopes. If not, you can try even a descent from the peak. each way you do it, check the conditions on the spot ;).

To better get a feel of the terrain there, check out some of our old articles like CIUCAS MOUNTAINS BACKCOUNTRY SKIING DAY or Ciucas skitouring reloaded. 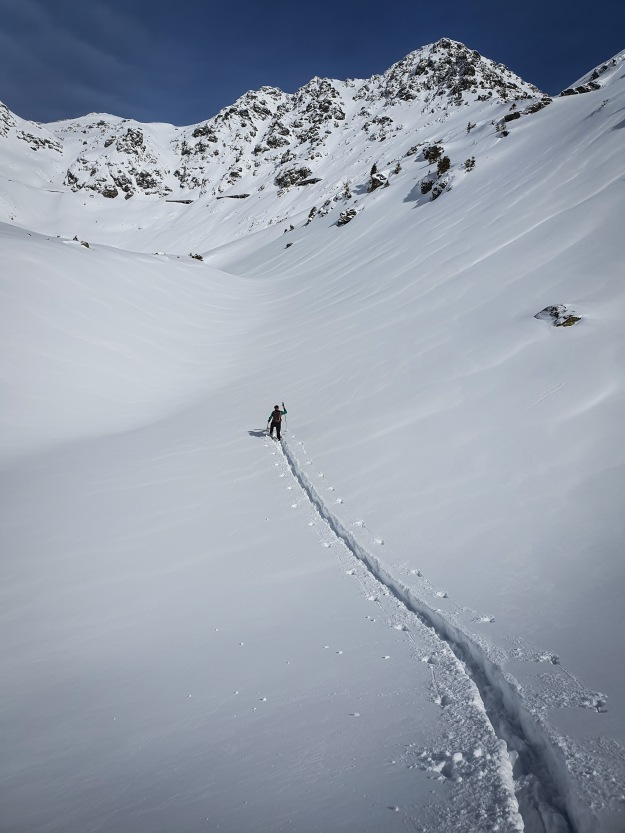 An experience of some weekends ago, probably the only powdered days of the year.
Balea Lac and Fagaras mountains remain one of the coolest back country and freeride areas in RO and probably the only mountains with serious lines. Easy to admire but dangerous to approach 😆😅💪… I m glad we chose to go there. In the first day we skin our way up from Capra cottage to Balea Lac, then ski down to Doamnei valley, skin up again and made a final descent on Balea Valley, just under the cable car. We had fresh snow and was nice to remember how that feels. Then we took the cable car up and parked out skis at Balea Lac.
We sincerely liked to stay at Balea Lac or Balea Lac 2 cottage, clean rooms, clean bathrooms, hot water and good food, we clearly recommend it.
The second day spent at Balea we skin our way up vaiuga , near Vanatoarea lui Buteanu peak, made a descent to Capra lake, skin up again and then chose to go down the south part, in the sun and at a later hour, following a group of austrian skiers that had a guide. I would honestly  recomand to avoid this area on clearer days and with temperatures over 5-6C degrees, especially when there is fresh snow accumulations. I found the snow quite heavy…
Ofcourse, we had to go down anyway because we had our car at Capra and we would either go down now or later…The transfer to the south part during the heating periods is very debatable.
Until next time, ride safe! 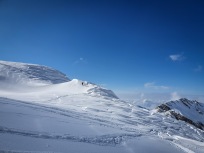 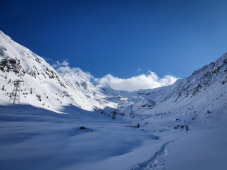 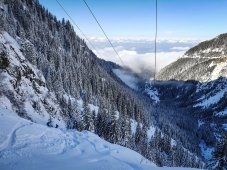 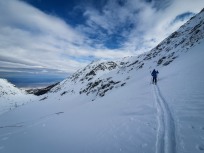 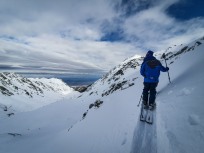 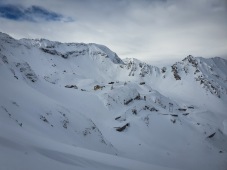 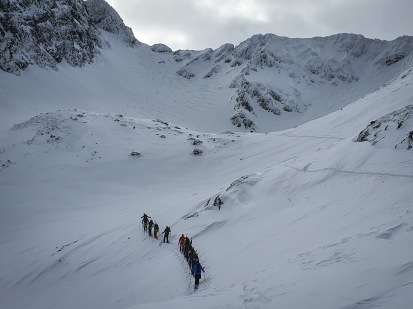 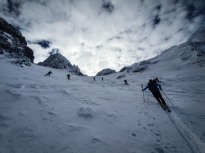 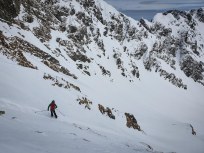 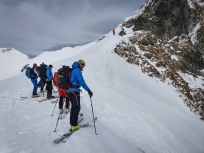 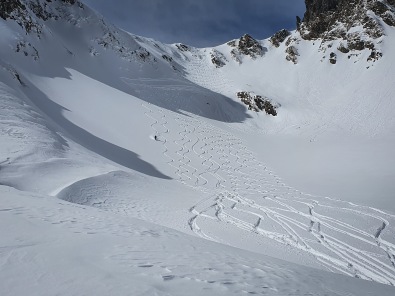 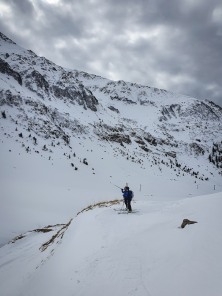 Last weekend we have been to Iezer mountains on our annual ski touring trip there. I think this is the 4th year that we made it here, and it is my 4th year of ski touring :)))… man, time flies so fast…

Each year was similar but somehow different. In terms of snow conditions, this year was a lot more snow and we had some pow in the first descent on the upper part near the ridge of the mountain. Being so hot all of a sudden, I don’t think it was 100% safe to try new lines or spots, so we stayed chill and shred the classic descent from the ridge directly to Iezer refuge. Maybe next year we will try a descent from the peak, that will be cool ;D. I remember last year I was feeling brave and took a climb just beneath the peak. My luck was that fog come and “ruin” my descent :))))

This year the ski party was made by me, Tiberiu, Nicu and Bogdan A. We started touring just directly from Voina Hut, that was a premier because none of the previous years had snow right from the parking lot… What a luck, otherwise we should have walked that stupid forest road until the shepherd’s hut in the alpin area where the forest stops.

It’s a long climb/walk to Crucea Ateneului, around 10 miles or so with at least 1250m elevation. We had great weather, sunny and no wind.

Once we descanted, we had some nice pow at the beginning and some crud later on.

The refuge is looking good, by our standards :D. The guys from mountain patrol are really trying to make it better each year.

We made 3 descents in the first day and then stayed in the refuge, talking and making ourselves some tee and some soup. Nicu had some digging to do in order to get some water. The guys from mountain patrol indicate us the spot to dig for water, thanks guys! It was a nice evening and we took some good night sleep. The sky was full of stars that night and the refuge was pretty warm because of the sunny day we had :D.

Next day the sun didn’t show his face just until we almost made it back to our cars. We also took 3 descents and then a last one in the fog. At the end of the final descent the sun showed up but the snow was bad, pulling on our knees a bit to hard… it was like we had our skins on our skis :))). In the forest, we just found more heavy snow and sweet our asses off until we reached our car. We stayed to eat something at Voina and then drove our way back home.

The track from the first day you find it here. The retreat was on the same path as the ascent. We leave you some pics and an edit. Enjoy! 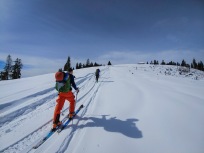 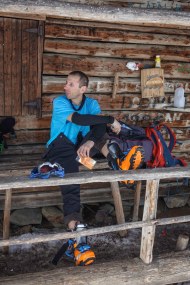 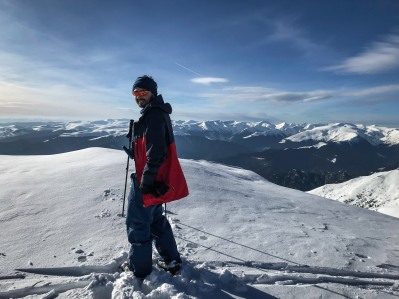 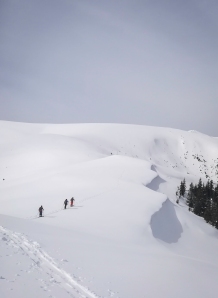 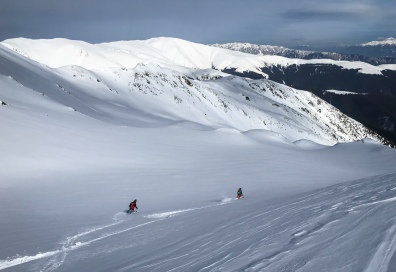 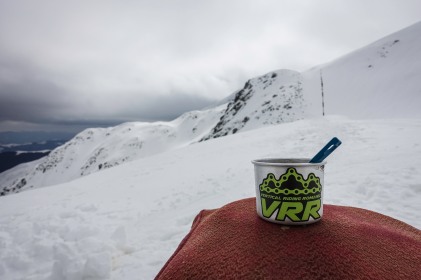 First turns of the season with this iconic sight. Not the perfect weather but the slopes were great!
Leaota mountains fall epic ride 😎📸🍁🚵‍♂️🏞️
One of the best sunsets in Romania, 99% chances of finding it in Macin mountains. Beautiful photo captured by @cristinaion_ 😎📷🖼️🌄
Sunset beach 😍🌄🚵‍♂️